We at the Mishawaka had more fun last weekend than we’ve had all Winter.  And with good reason, it was the first of many #mish100 events we have planned for our 100th anniversary.  And when we say first, we mean the first 3, because we were able to cram an art show, a dance party, and a slumber party into one epic evening.

The evening began promptly at 6 pm at the Downtown Artery.  They were gracious enough to host the unveiling of an absolutely stunning commemorative piece by Chris Bates, commissioned by the Mishawaka to celebrate our 100th Anniversary.  Being who we are, we knew we wanted to get our friends, fans, and community involved, so we put out a call to artists, inviting them to submit pieces to be shown at the unveiling. 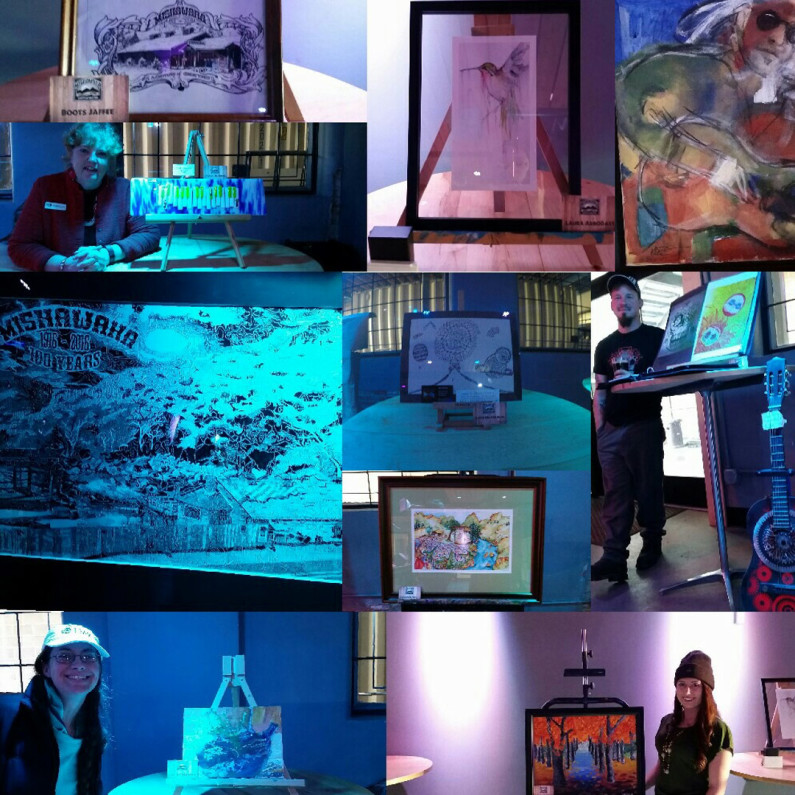 Honestly, we could not have been more pleased with the quality and variety of the work we received.  There was a little bit of everything; drawing,painting, graphic design, sculpted elements and even a guitar!  Criteria for the selection was intentionally kept open ended to encourage diversity.  In addition to the passion and creativity on display, patrons were also treated to an intimate free performance by Jus Sayin.  Singer Dechen Hawk’s smooth and soulful voice carried throughout the gallery, a perfect addition to a music themed art show.

At about 7:30, 50 or so adventurous individuals boarded the first shuttle up to the Mish in 2016, as the bands and crew were preparing for the party of a lifetime. 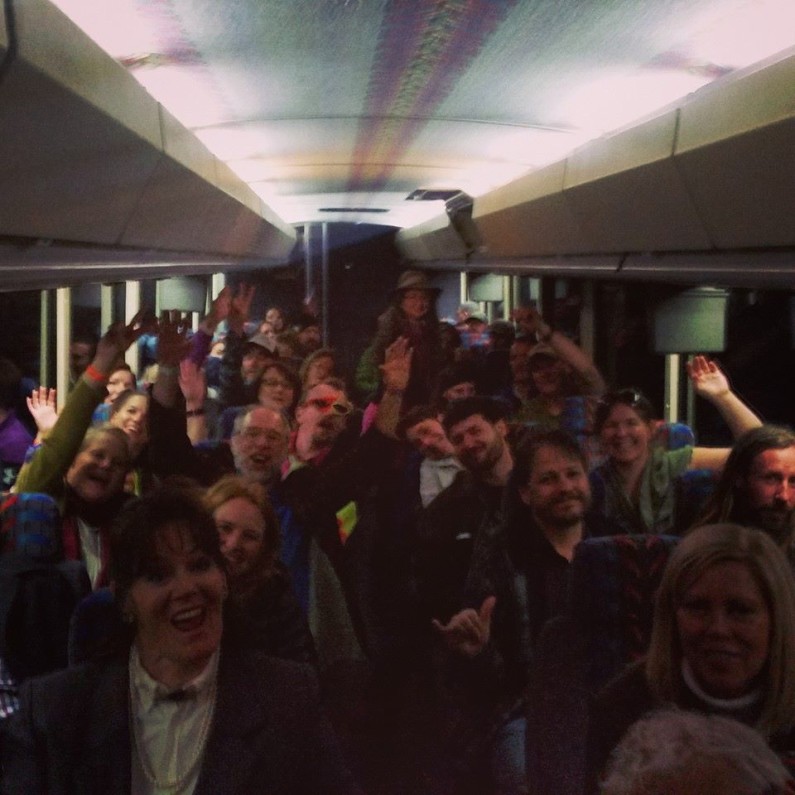 Stella Luce took the stage as the people poured into the SpokesBUZZ lounge.  The fireplace set the mood, and the room was filled with a feeling of celebration.  In a set comprised mostly of quirky originals, Stella Luce finished up with a cover of Cheap Trick’s “Surrender”.  The group performed the song with passion and energy, and the crowd responded accordingly, with a rousing singalong.

The classic rock cover was the perfect transition to the Velvet Rope, who took the stage after a quick and efficient turnover.  The NOCO supergroup approached the stage with style and swagger that only they could pull off, and started off the night with a decidedly 80’s and undeniably radical version of “Happy Birthday.”  The group injected more than enough of their own flavor into the song to avoid those pesky copyright lawyers.  The Velvet Rope then proceeded to play hit after hit, as the crowd dropped it’s guard and began to dance. 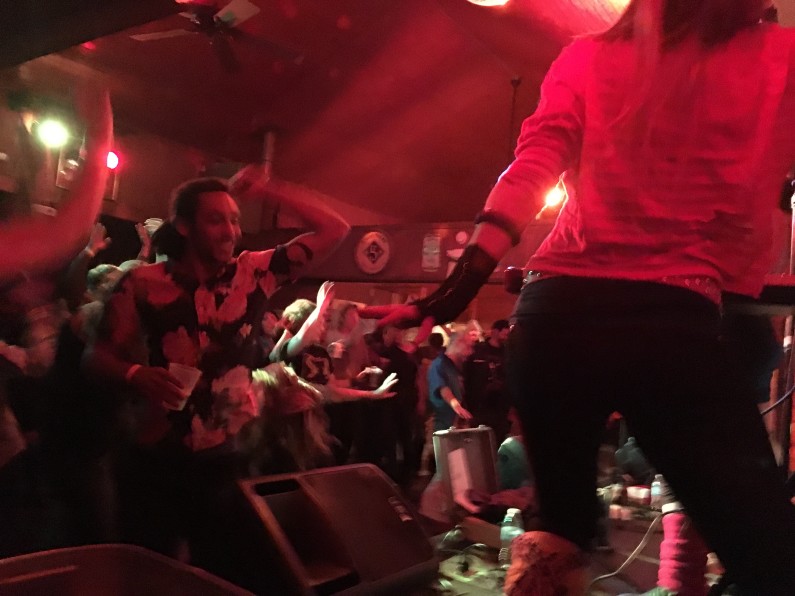 The band kept that energy going for longer than should be humanly possible.  Shuttle patrons reluctantly boarded their ride home around midnight, though you could clearly see they wanted to stay and enjoy the rest of the party.

As the crowd died down to only those committed to the sleep-out, DJ 7inches of Heaven entertained the crowd and kept the energy up by spinning both hits, and tastefully obscure tracks from the 80’s.  The pretzel bar was the perfect nightcap, as the people found places to lay their head.

When it was all said and done, the Mishawaka managed to facilitate a party lasting almost 17 hours, with only a brief break for napping.  So how do you end an adult slumber party?  Simple: “Put some bacon in your bloody” – Alana Rolfe 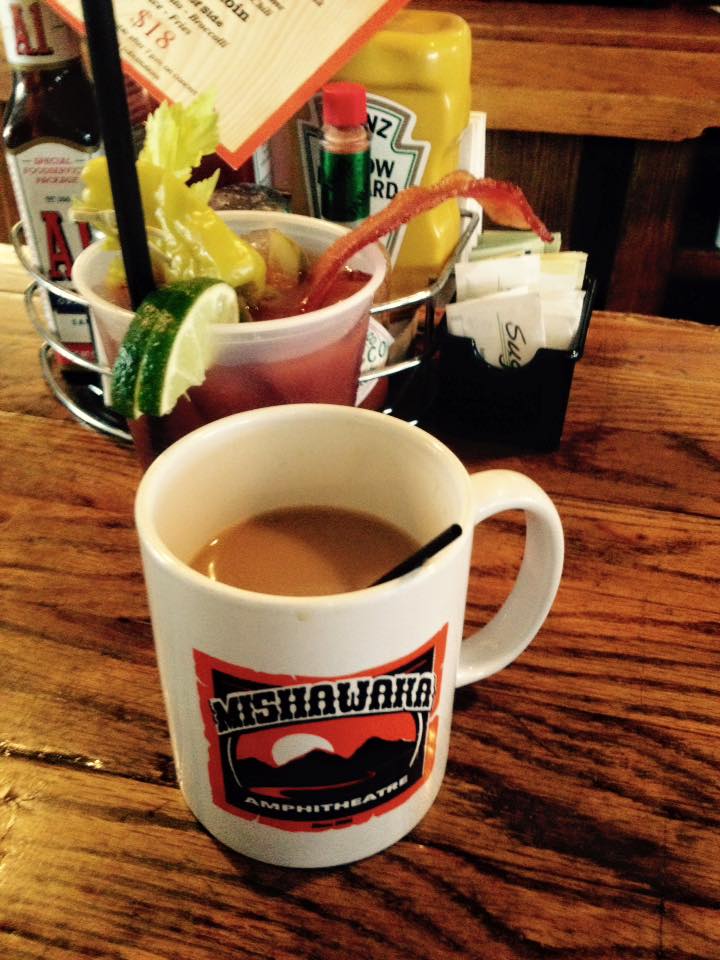