backstage. The sun in the canyon at noon is quite a sight, and as Stephen Marley’s band began to

disembark the dark bus, you could hear the sound of a few women saying, “Oh my gosh, look at this

place!”. Most people don’t see the Mish in the middle of the day (unless you’ve been rafting or moto-ing

around the canyon) and it’s always a sight to see from the production standpoint, a band who has been

traveling all night, (usually from a venue in a city, where backstage was a dirty parking lot behind a 7-

11), wake up to the beautiful Poudre Canyon.

scenery. With a crew of 22, Stephen Marley’s band was in full effect exploring and enjoying the day

away. This isn’t the first time at the Mishawaka for some of them, but they are always excited to come

back. One band member mentioned before he left that “This is my favorite place, every time is so good.”

Those are the magical words us Mish employees love to hear, especially after a grueling day.

As the shuttles and cars started to load in, the sound of reggae echoed in and out of the canyon

and all around were people laughing and dancing waiting for their tickets at the box office. As people

descend the shuttle, you see seasoned Mishawaka visitors and newbies. The greatest part is that their

reaction upon arrival is the same. Usually in the form of a “woo hoo!” or “WOW!”, energy begins to fill

the area and the love is felt all around, in the way that only happens with reggae show. Many people are

sporting shirts printed with Stephen’s picture on them, and some with pictures of Stephen’s father, Bob

Marley. You can see the resemblance between the two, and soon once the show starts you truly see a

piece of Bob Marley shining out of Stephen. 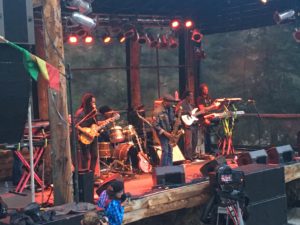 As the sun begins to hide behind the mountain, the opening band consisting of Jo Mersa Marley,

begins to cheer loudly. The best part about this opening band, is that they are a part of the Marley

family and their closeness shows when they begin to play, seamlessly transitioning from song to song,

while dancing and improvising. With stunning vocals and harmonies, the singer’s voices resonated

through the natural acoustics of the canyon, while reggae riffs gently carried them down the river. It was

a Caribbean setting, everyone relaxed and in their sandals, with our own version of the beach. They

bring the house down all while continually hyping Stephen, who gets ready on his bus to takes the stage.

Stephen Marley may come from music royalty, but he has clearly paved his own path as a five-

presence is quiet and powerful, as he walks to the stage you can see that he is prepared and ready to

show this crowd how reggae is done. Playing numerous songs from his new album “Revelation Pt. II: The

Fruit of life”, Stephen commands the crowd to dance and be thankful and enjoy life. He then goes into a

string of Bob Marley songs with his own twist, and the crowd moves in syncopation, singing every word.

It’s not every day you can hear Bob Marley covered in the way only his son can cover him. The family

affair continues, and two of Stephen’s kids come on stage and begin to dance. His older son joins,

waving the Jamaican flag, proudly dancing to the beat and smiling and interacting with the crowd. There

is no stage fright, there is no hanging behind dad or acting shy. These kids seriously dance and steal the

musical talent. From the tightness of the band to the closeness they all have on stage, it truly is a

magical thing. After playing a long encore, Stephen says thank you to the fans, and tells them once

again to be thankful for all they have and how special it was for us to be together. The magic of the Mish

strikes again, and everyone leaves smiling and singing. As we clean up backstage, band and crew hang

out with friends who made the trek from New Zealand to see them. There are people chatting and

laughing all around and you can tell that the band truly enjoyed this show. When the buses start to load,

Stephen’s drummer says goodbye with a long hug and a “I can’t wait to come back!!! So beautiful, Thank

you!!”. That’s why we do what we do at the Mish. But even with our help in production, most of the