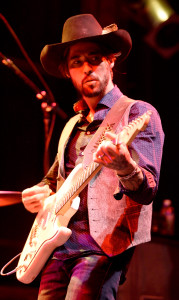 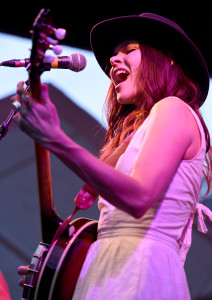 Another sold out show for the 2015 season is in the books! It was such a pleasure to have the incredibly talented Ryan Bingham and his band on our stage, creating memorable music and moments.  Opening band HONEYHONEY surprised everyone with their intense soulfulness and talent. The three members included Suzanne Santo, Ben Jaffe , & Conor Meehan. Vocalist Suzanne uplifted the crowd with her soulful voice, unlike anything we’ve ever heard. Both sweet and smooth, just like honey, HONEYHONEY played a wonderful set.

As a singer/songwriter and overall musician, Bingham exuded emotion and passion into each and every song.  The sold out crowd absorbed every note and sound echoing off the mountain side through the canyon. A perfect balance of country, rock n’ roll, harmonica, and Bingham’s gritty voice lifted people’s hearts as well as their dancin’ shoes. HONEYHONEY briefly joined on stage, kickin’ it up a notch and making everyone slap happy. The end of the set included Bingham solo on stage without the rest of the fantastic band. He used this time to bond with the crowd and played some songs with that catchy, spicy, Tex-Mex flare. With the release of his newest album “Fear and Saturday Night”, many fans sang along to some of his popular songs such as ” Radio” and “Snow Falls in June”.  It is clear that Ryan Bingham is of true artistry, it carried over into his live performance, no wonder we were packed full with some of his biggest fans.