This weekend the Mish happily hosted the one and only, Rebirth Brass Band, and boy did it kick our brass! This eight piece brass and percussion group had the crowd under the illusion that they were strolling down Bourbon st. in downtown New Orleans. To a less observant spectator, perhaps all that was missing (aside from the physical setting) was the smell of Cajun cooking, no curfew and accents native to a higher place.

The Cajun sound and rhythm bounced off of the canyon walls for the 2014 summer seasons first Sunday evening show, accompanied tastefully by a beautiful sunset and clear summer weather. The earlier ending Sunday shows seem to link up so nicely with the sunset, for a  sensual musical experience that is difficult to obtain anywhere but the Mish. Patrons gathered near the back of the yard and leisurely absorbed the southern sound while others closer to the stage participated in extreme booty shaking; regardless, the crowd was clearly enticed by this Grammy award winning group.

The set was up-beat, easy to dance to and full of hoots and hollers. Such an exuberant energy was passed from the stage to crowd, as the front man of the group whooped, holllared and whisteled to fill certain areas of the song and keep the crowd engaged. To wrap up the show the band encored with the classic “When the saints come marching in” it was clear that Rebirth Brass Band was wrapping up there Colorado tour with a bang at the Mish! 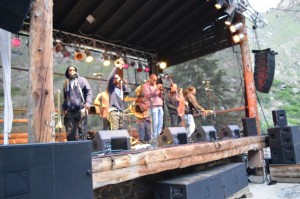 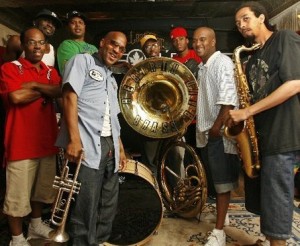