It’d been a while since Motorhome had rolled onto the stage. And when the band decided to reunite after nearly four years of being apart, they decided to ring in their reunion by visiting a place that’s always be 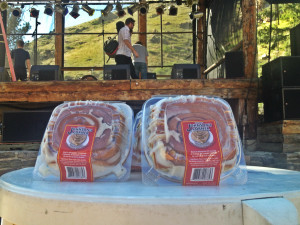 en home to this ‘backwoods’ band on wheels, the one-and-only Mishawaka Amphitheatre!

Based on their killer performance Saturday, Aug. 02, you’d never know the band had only practiced a mere four hours the night before the concert, in addition to a brief sound check, before taking to the stream-side stage for the first time in years.

The Mishawaka served as the perfect venue for the band to kick off their concert reunion.  Performing with all-American singer, song-writer Shinyribs and local band, Mama Lenny & The Remedy, the event summoned all of FoCo’s faithful, including Motorhome fanatics, to the shoreline for an evening full of music, laughter, drinking and…cinnamon rolls! 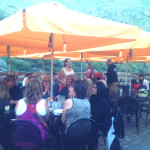 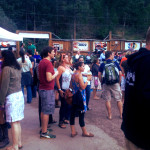 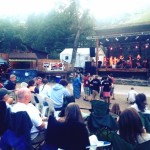 High-spirited is a word which seems to describe bands and fans, alike, during Motorhome’s performance. 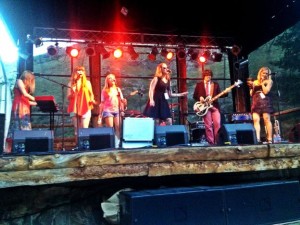 Mama Lenny & The Remedy set the tone for the evening by getting fans on their feet and dancing to a few of the band’s hit songs; like “Not a Girl,” “All Yours” and “Mixed Messages.” This 8-piece rock, rhythm, and blues band also incorporated a few cover songs in their set list; including fan-favorite- “I Want You Back,” by the Jackson 5.

The Mishawaka couldn’t have asked to kick off the night with a better start. Mama Lenny’s electrifying stage presence, palpable energy, and unique bond was evident…and contagious…to everyone present.

It seemed as if everyone who came to Saturday’s concert came with one intent in mind, and that was to have a good time.

Kevin Russell and his band, Shinyribs, kept the excitement going when they took the stage in what could be described as

Shinyribs put on a high energy, exaltation of spirit kind of show, which seemed to touch on all styles of American music. Whether it’s on his 6 string Uke or his Electric guitar or singing acapella, Russell has a way of entertaining audiences like no one else.