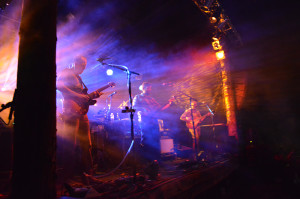 “It has been 10 years since Moe. has graced the Mishawaka stage and we were so happy to have them back!”

The Mish was Moe’s first stop for their 2014 summer cross-country tour. The venue was sold-out weeks in advance, so everyone was prepared for an unforgettable night–and an unforgettable night it truly was! As the sun set behind the canyon walls and the river roared next to the amphitheatre, the jam band veterans took the stage and ignited a high-energy performance for a crowd that was ready to dance the night away.

Their first set kicked off with a bang! The gathering of Moe fans (also referred to as Moe.rons) were excited to see the group approach the stage. As the lights fell over the cheering crowd, the guys took their positions and began to play their intro to “Downward Facing Dog”–a song that truly won over the crowd in seconds. The rest of the night followed with an influx of catchy lyrics, along with tasty guitar riffs and solos. The band played two sets and one encore that encompassed tracks from their past 11 studio albums. 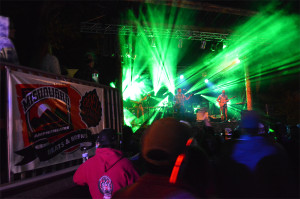 The return of Moe to the Mishawaka was everything everyone had hoped it would be! This veteran jam band echoed their music through the canyon walls. And as much as they could feel the love from their fans, the fans were feeling the love right back. So far this summer, the venue has welcomed some memorable performances and Moe’s reunion with the Mishawaka was just that. There are still several great shows lined up for the Mish’s 2014 summer concert season, so don’t hesitate to snag a ticket and enjoy the one-of-a-kind experience that you can only have here at the Mishawaka!

– Listen to Moe’s full set live from the Mishawaka HERE! –