After a tremendous season kickoff featuring Head for the Hills, the Mishawaka kept the party rolling with a jam-packed concert lineup. For our second show of the 2014 summer season, the Mish decided to host not just one…not just two…and not just three stellar performances along the beautiful streamside stage, but we welcomed FOUR exciting jam bands to the canyon for a night full of festivities. 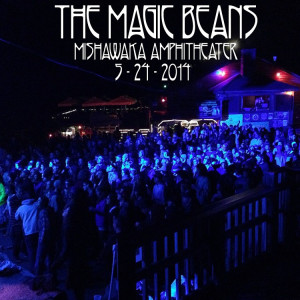 With talented openers such as Smooth Beethoven and The Drunken Hearts, as well as exceptional headliners like Fruition and The Magic Beans, there was an array of rhythmic music to be heard along the mountainside.

Despite the wind, rain AND hail, dedicated concert goers delighted in dancing to a mix of funk and rock-infused ensembles, as well as listening to a unique blend of bluegrass, soul, folk, rock n’ roll and electronica setlists played by Fruition and The Magic Beans.

Not only were the fans eager to celebrate another exciting evening at the Mish, but our performers were ready rock with some new tunes, well-chosen covers and several hit songs. The atmosphere surrounding the night was electric!

No matter rain or shine, fire or flood, Cache la Poudre patrons have always been faithful fans to the Mish.  This year, the Mishawaka hopes to thrill fans like never before by bringing some of the top touring talent to the Poudre for a summer filled with groovy tunes, the great outdoors and unforgettable experiences.