We’ve had a lot going on at 830 North and we recently hosted the grand opening of our new Greeley venue, 2454 West with The Cosmic Charlies. Check out what we’ve been up to below!

The Cosmic Charlies at 2454 West

On Saturday October 23, we opened the stage at 2454 West in Greeley with a super fun classic rock show from The Cosmic Charlies. As soon as we opened doors, we had lanes filling and a crowd at the bar anxious to see what the show was all about. The Cosmic Charlies took the stage around 8pm (after getting their last frame of bowling in) and played a mix of Grateful Dead, Tom Petty, Allman Brothers, and more.

Second set was filled with more hippie favorites and more dancing feet- some bare- on the dance floor. The band played until about 11:30 while people partied and bowled to the music. Everyone loved the energy in our newly defined space and were talking about how good the band sounded and looked under the lights. This was the first of many shows to come at 2454 West and we couldn’t have asked for a better way to kick it off! 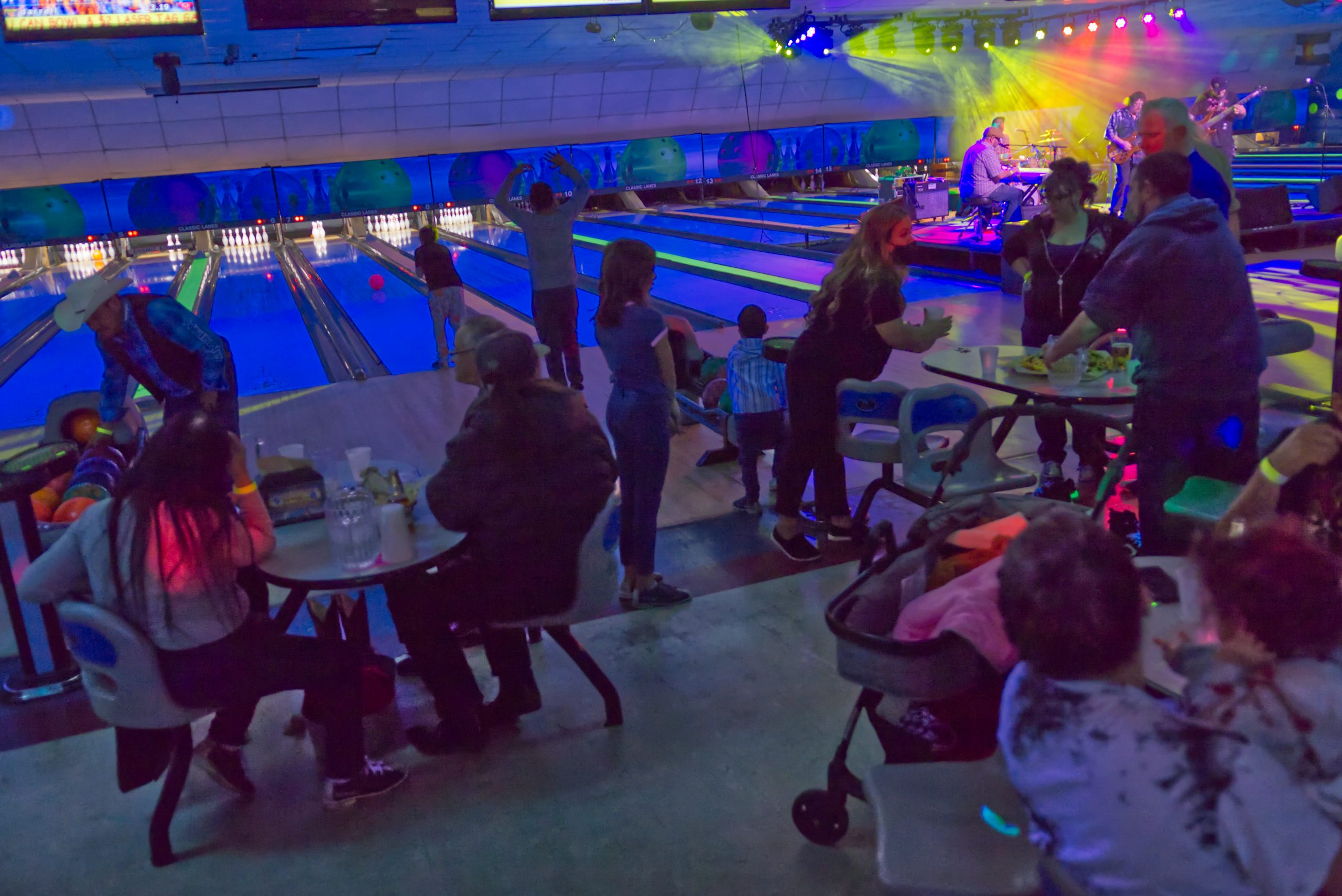 The Nightshades w/ People in General at 830 North

“Live on the Lanes” at 830 North hosted local Fort Collins band The Nightshades. The musical styles of reggae, jazz, hard rock, metal and funk rock which has allowed them to create their own unique sound. 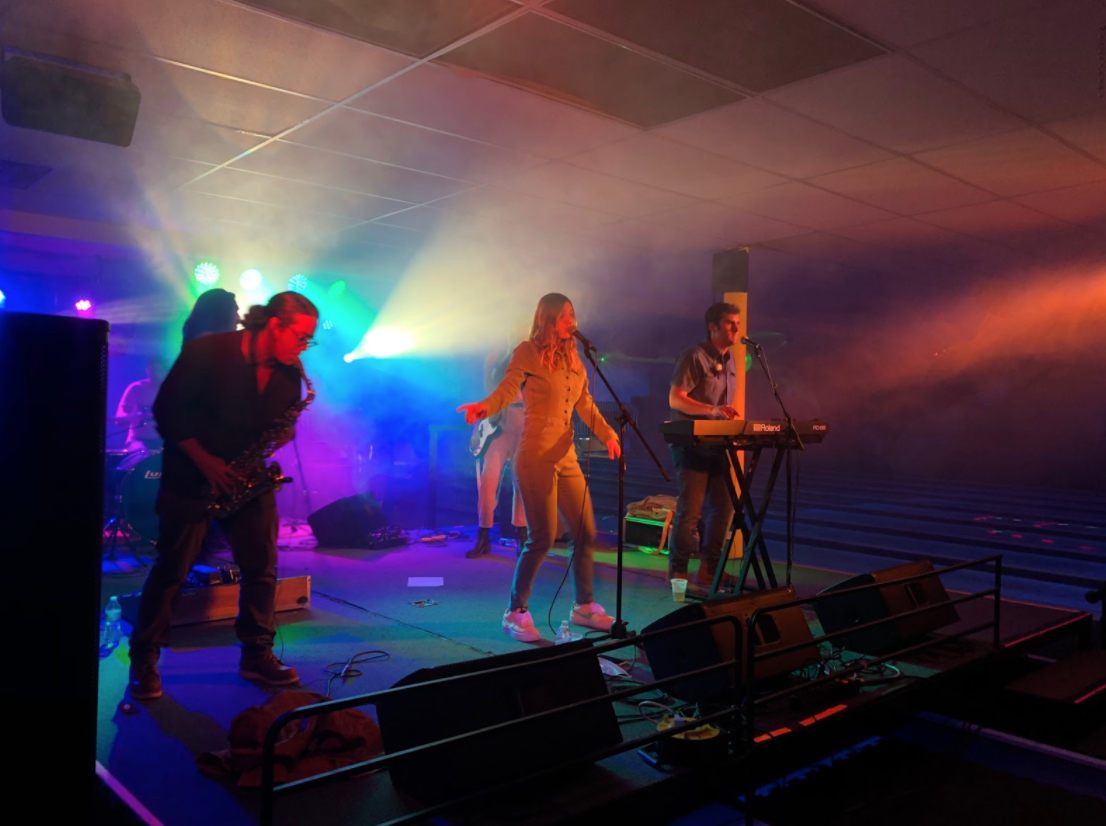 The audience showed their love by flooding the dance floor and vibing to their music. At the end of the show, each band member was introduced and was allowed to do a solo with their instrument. This allowed the audience to get to know the band and the band was able to showcase their talents. 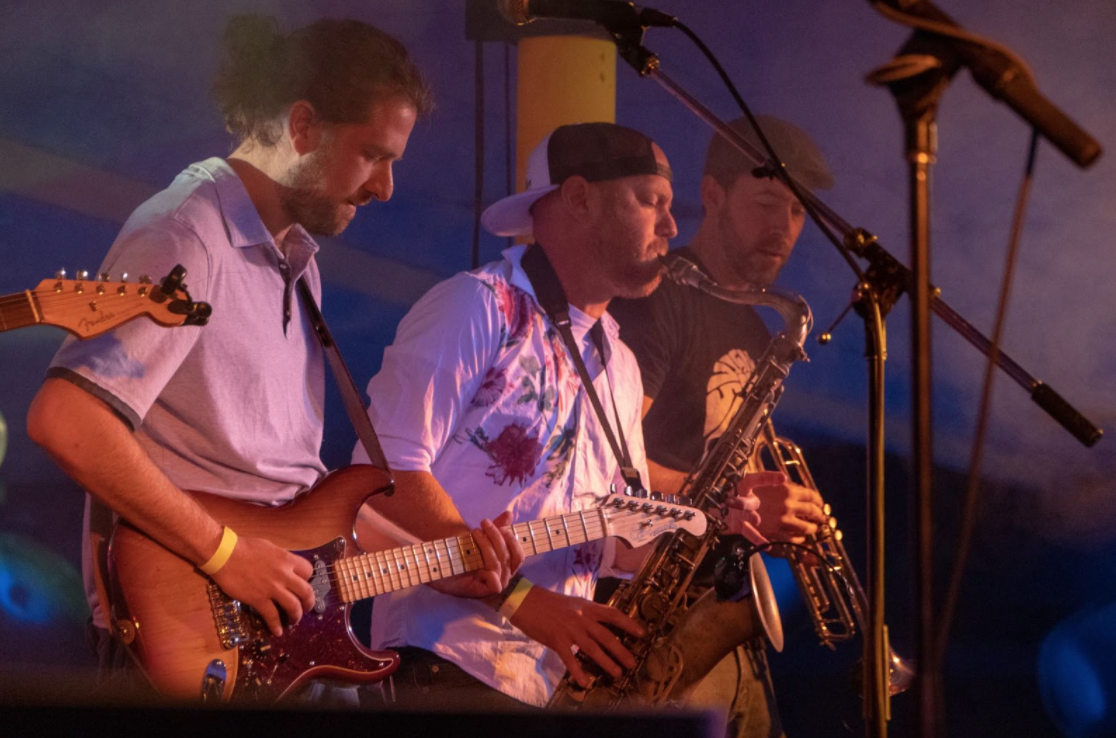 Open Jamming on the 830 North Lanes is a new series coming to you! October 21 marked the first Open Jam at 830 North with members performing from jam bands like Aqueous, The Great Salmon Famine, Float Like a Buffalo, Pipin’ Hot, The Buzz and many more. The event was put on by Mish’s own Summer Camp Counselor, Allyce, who organized the bands and sign-up sheet for attendees. 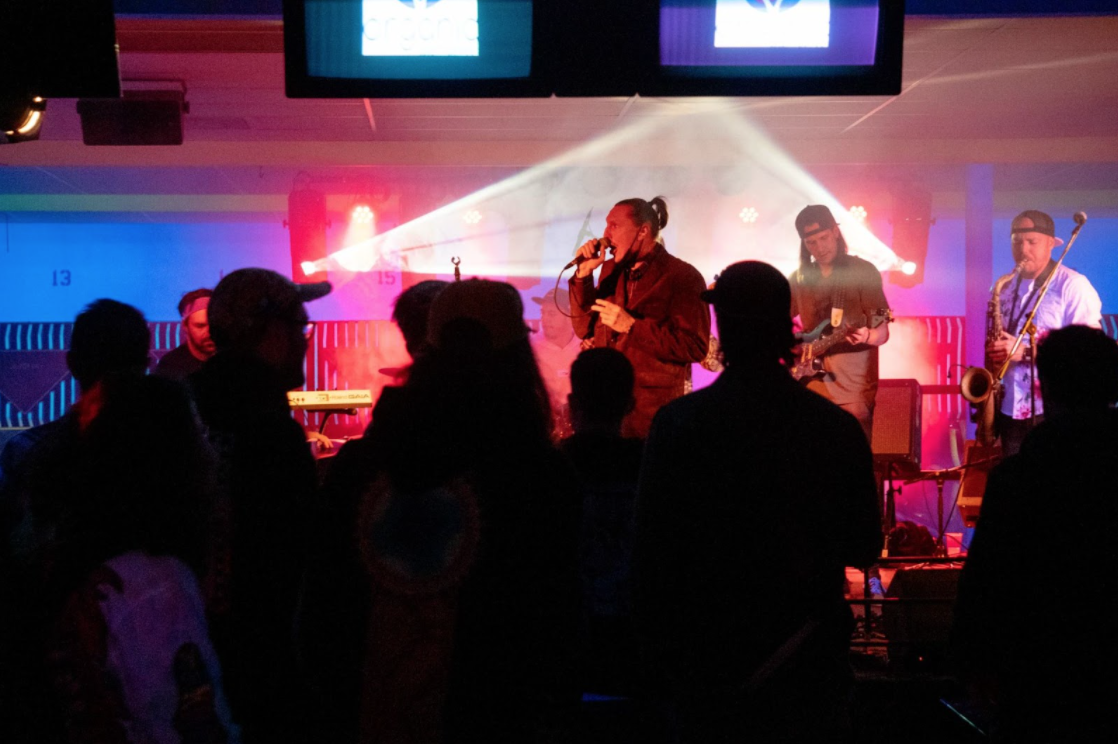 The crowd was very involved in the show, band members would call out to the crowd for “any other trumpet players” and actively encourage fans to participate. Attendees were stoked on the experience, getting down in front of and on the stage!

Aqueous filled the dance floor at the end of the night with a solid 30-minute jam session to round out the community-centric evening. Keep an eye out for future Open NoCo Jam’s at 830 North, we expect this will be the first of many jams on our bowling lanes!

“Live on the Lanes” at 830 North hosted 2MX2, a local Denver Latin pop band along with Lady Gang. 2MX2 brought in a large crowd and hosted a dance battle right on stage. The winner of the dance battle received $100. The crowd loved their music and they got everyone dancing on the dance floor. Dance battle or not, they created a great atmosphere. 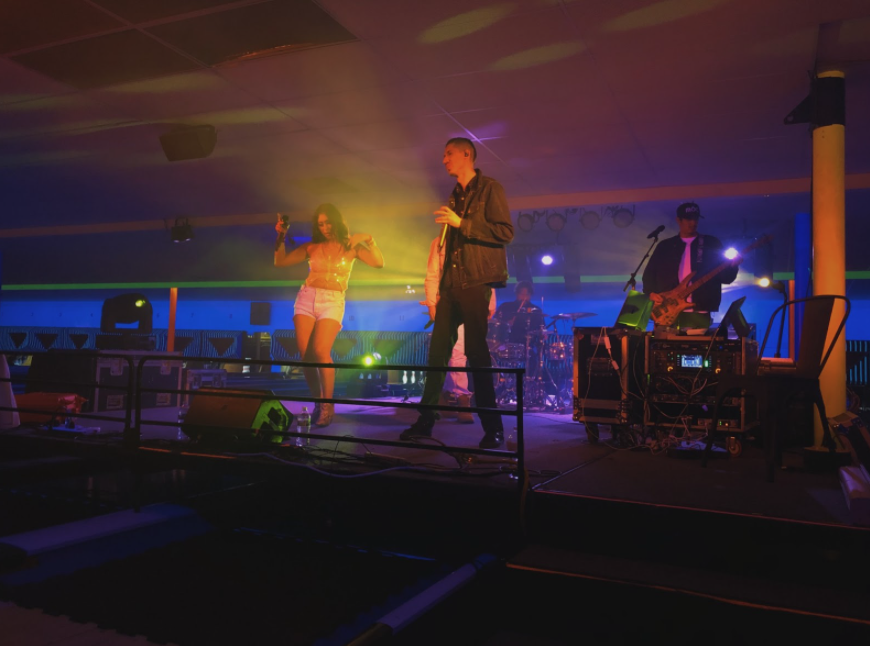 Not only did they provide the audience with a great musical performance, but they also provided them with a light show. The flashes of bright colors though the show allowed the audience to be in an immersive musical experience.

Virginia’s Kendall Street Company made a stop on their fall tour at 830 North and showed us what it meant to have a true Thursday Throwdown. Fort Collins’ own Lucid Blues kicked off the night with an hour long set of blues driven jams and funky melodies. When Kendall Street Company took the stage around 9:30, the crowd had gotten most of their games in and were ready to boogie. 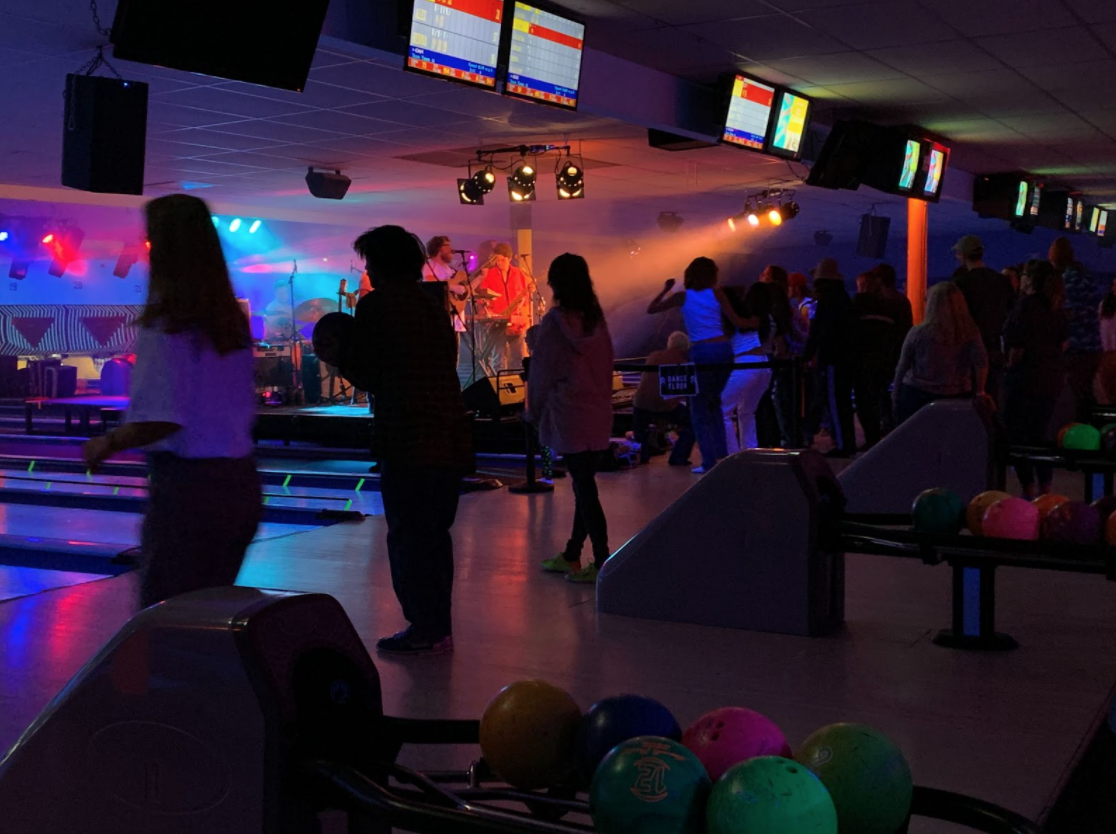 The dance floor was bumping for nearly all of KSC’s set with a big group of college students who really brought the energy. By the end of the show, most of the crowd was singing along and grooving with their friends, including our first almost-mosh pit during their “Chope Suey” tease. Everyone at 830 North had a blast that night and we look forward to have Kendall Street Company back again soon!

Radio Thieves and Revenge of the Scene at 830 North 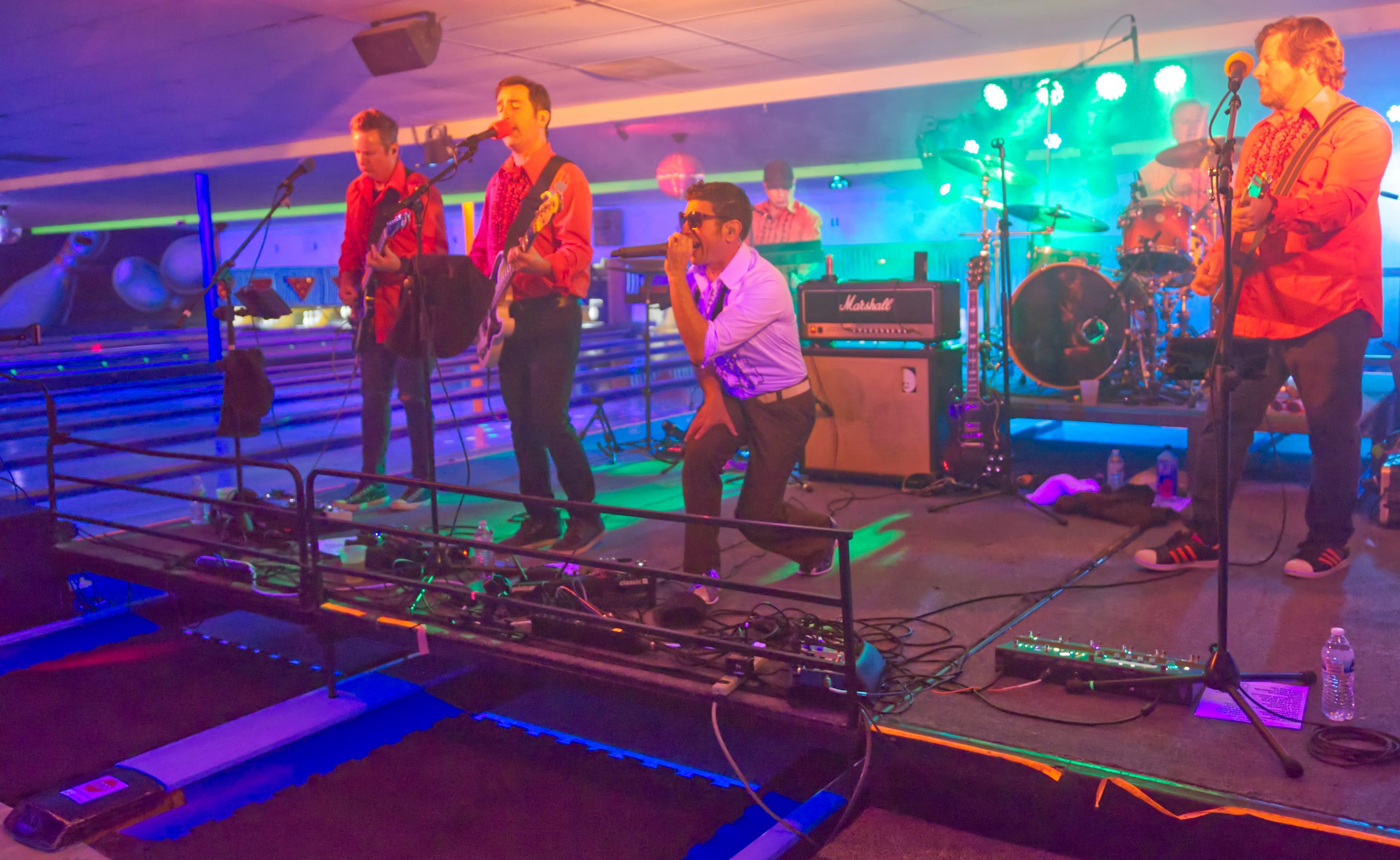 Cover bands are all the rage but Radio Thieves is on a whole other playing field. This six peice band might have had fun playing on the lanes but it was the lead singer, Lee Queaneous that stole the show. Radio Thieves played 80’s and 90’s cover songs, even singing “99 Luftballons” entirely in German. 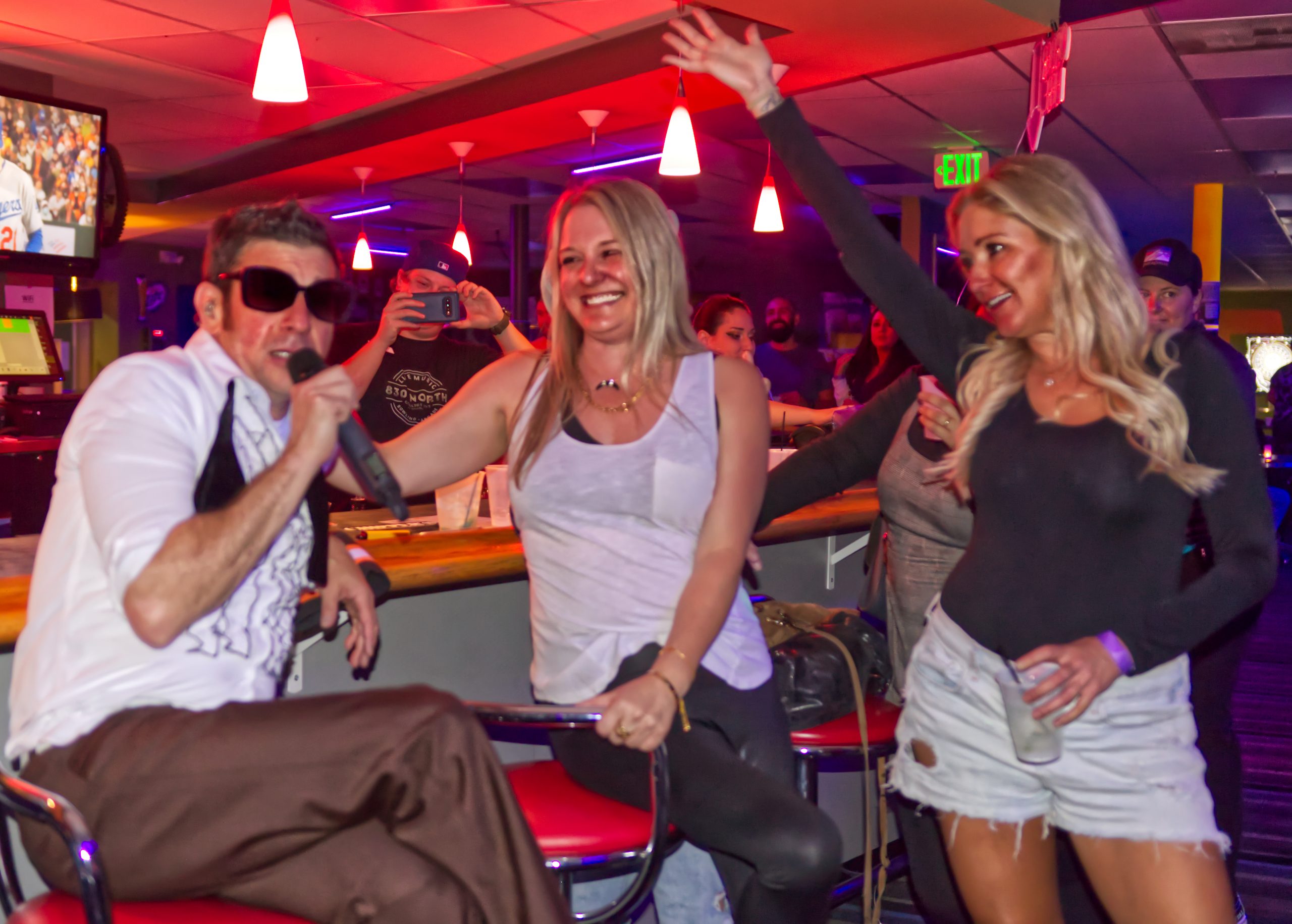 From stage to bar, Queaneous was all over the venue. People were able to be right next to the action on the lanes, on the dance floor and even while grabbing a drink from the bartenders. Radio Thieves’ stage presence was undeniable, 830 North and Mish staff along with patrons at the show were boogieing all night long. 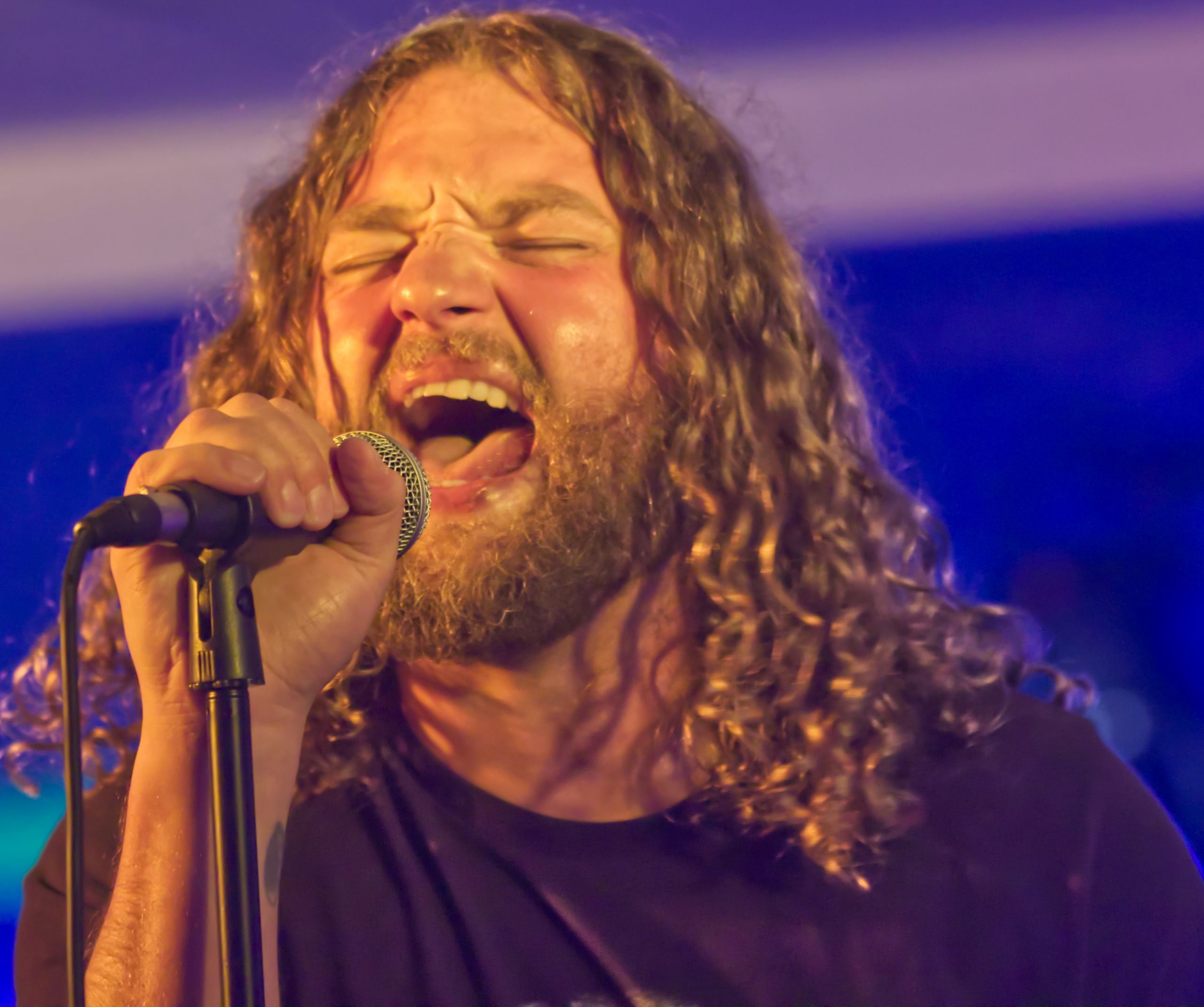 Revenge of the Scene was onstage next after Radio Thieves, bringing the 90s and 2000s emo and pop punk nostalgia to the lanes of 830 North. Songs from popular bands like the All American Rejects and Panic! At the Disco were featured in the staple nasally vocals that often accompany these genres. Revenge of the Scene finished off the show with one of the most iconic emo songs from the 2000s, “Ocean Avenue” by Yellowcard. 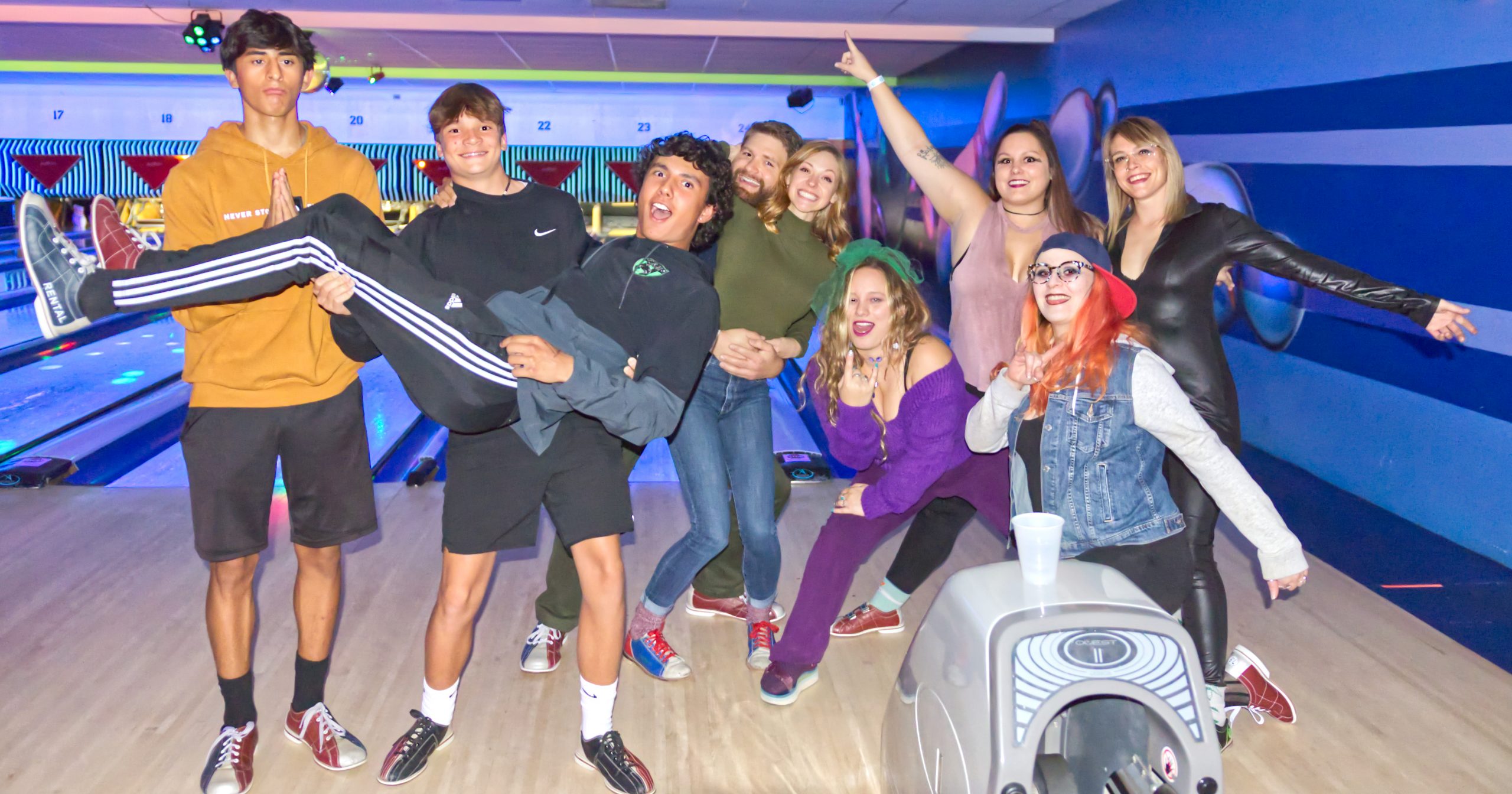 All in all, Revenge of the Scene and Radio Thieves brought enough energy and memories to last all of October long. 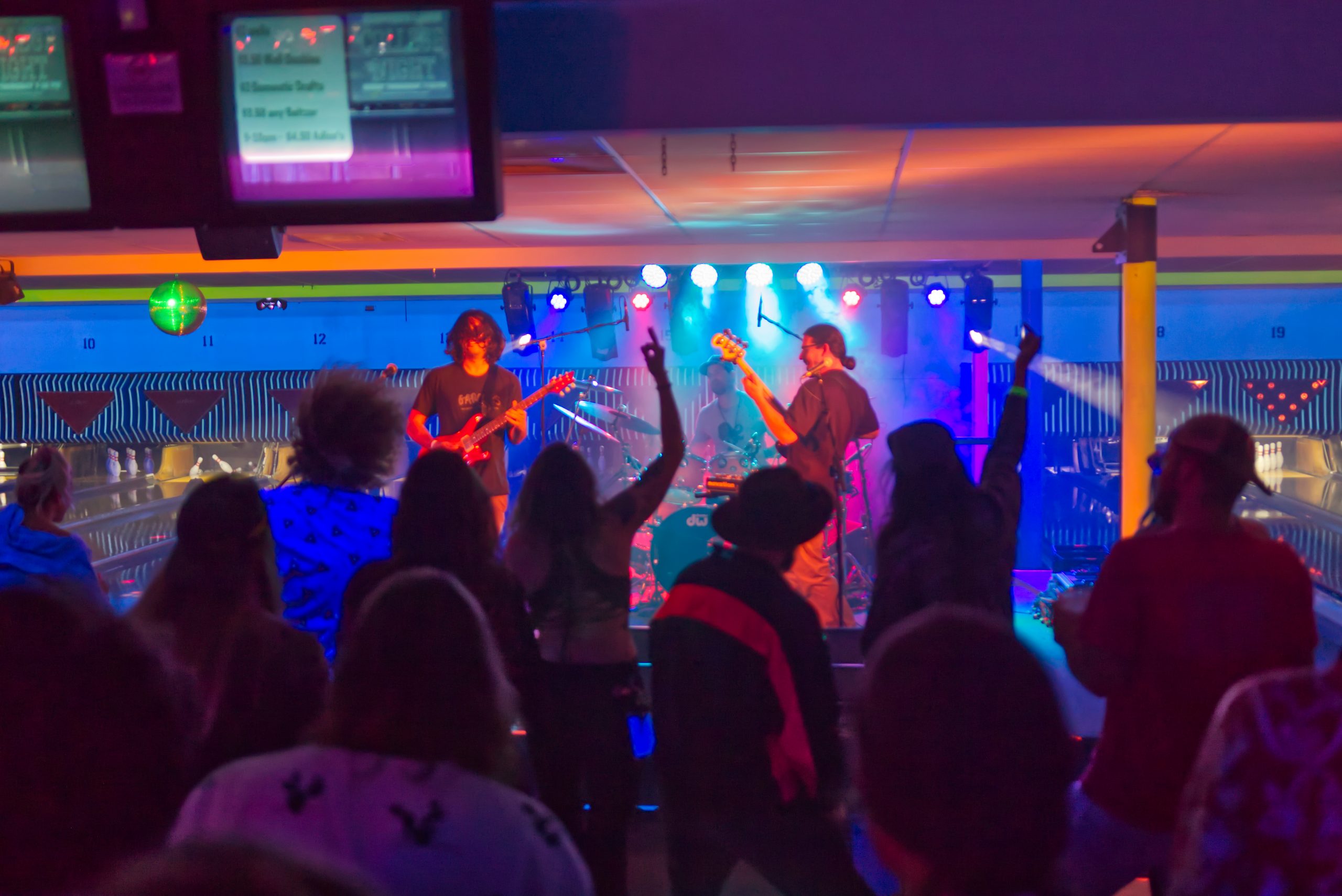 Cycles has been a local favorite for as long as I can remember. They’ve graced the Mishawaka stage and came back to jam out with us at 830 North this past September. The trio brought the chops through the ripping guitar, bass grooves, and dynamic drum beats. 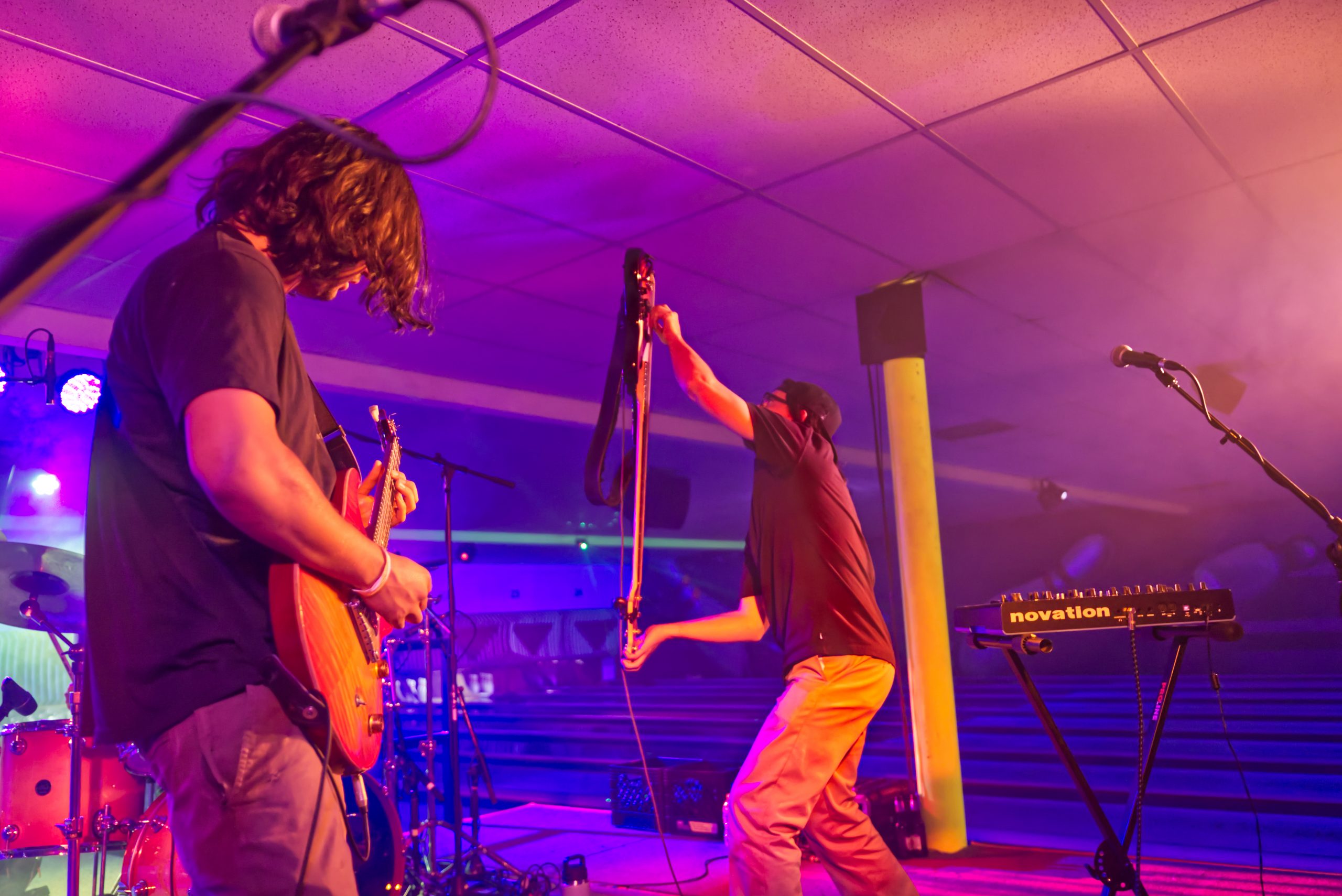 The crowd ate it up and the dance floor was full of eager fans ready to get down to the progressive and enchanting jams that Cycles brought. Tucker McClung, the king of slapping the bass, even brought out a trick where he balanced his bass with one finger. Cycles always provides the heat but this show in particular was one to remember.