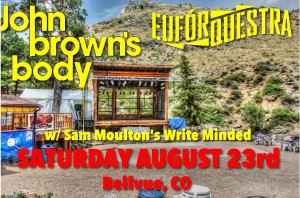 Go to top
Breaking away from the jam bands, acoustic sessions and funk fanatics that we are typically accustomed to, The Mishawaka brought in none other than New York & Massachusetts locals “John Brown’s Body” on August 23rd for an epic taste of reggae infused with electronic, funk, hip-hop and dub.

But it didn’t start there! We had to welcome acoustic hip-hop locals Write Minded and Mish favorites Euforquestra to start the night off right!

The guys behind Write Minded tore up our stage inside and out! Their set wasn’t enough as the crowd cheered on for an encore demanding they play another song and if it weren’t for a packed schedule of amazing music, then it would have happened! But the guys didn’t leave the crowd empty handed. What better way to leave the stage then by letting them know how to find them in the future! If you haven’t heard of these groovy, fast-paced musicians before then I beg of you, take some time to check them out and find their next show!

It was a pleasure welcoming Euforquestra back to the Mish for a second time this season! Apparently it wasn’t time for these guys and the Mish to part ways this season so they had to come back for some more funk and fun. The ensemble took the stage to a crowd of energetic, dancing fans and kept the groove going throughout the night. Something about epic sax solos tends to keep the Mish fans dancing all night long and that was exactly what Euforquestra did! As mentioned, it is always a pleasure bring this group of guys back for a night of sweet grooves and tunes.

Last but certainly not least, John Brown’s Body made their grand entrance into the Poudre Canyon at the Mish and played out their fresh reggae beats for two solid hours! The taste of reggae, dub and ska was a nice changeup for the Mishawaka and its fans. I will tell you now; it is literally impossible to stand still while JBB plays.  The performance these guys put on tops the charts and the amount of fun they have on stage echoes off throughout the venue to everyone there. It was a blast partying the night away with John Brown’s Body and we cannot wait to do it again!