Friday June 12th, Roosevelt Collier’s Colorado Get Down and Hot Buttered Rum hit the indoor stage for what effortlessly turned into one of the highest energy, intimate shows I’ve ever seen these musicians perform. Stuffing the SpokesBuzz Lounge at Mishawaka Amphitheater to the brim, and causing the floor to bounce with the crowd proved to be a pretty certain way to put smiles on the faces of attendees.

Then the co-headliner began. Hot Buttered Rum played first and boy did they light a fire under the butts of the audience. Audience members of all shapes, sizes, colors and ages were quickly under Hot Buttered Rums spell and took quickly to bouncing, dancing and having a straight up hootenanny! They kept mostly to original music, however, for the patrons who got the Mish early that day, Andy Thorn and most of the boys from Hot Buttered Rum had what I like to call, a pick-off, in the yard. They played standing in a circle, just in earshot of the restaurant. During this musical exchange I believe I heard a ‘Flight of the Durban’ cover. (brief video from pick-offhttps://www.facebook.com/lohimusicfestival/videos/927315717325593/) 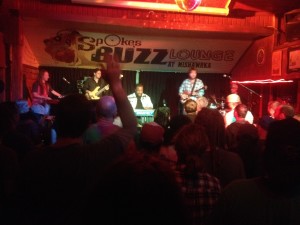 Following Hot Buttered Rums set, Roosevelt Collier and his band of Colorado Super Stars GOT DOWN! Roosevelt Colliers Get Down consists of Dave Watts (Drums) Joey Porter (Keys) and Garret Sayers (Bass) members of Colorado super-funk group The Motet, along with Andy Thorne (Banjo/ electric guitar) of Leftover Salmon, another well established and thoroughly loved Colorado band. Together, these five musicians took the audiences ears on a unique landscape of varying sounds. It was insanely cool, slowly toward the end of the set, older, less gung-ho audience members began to find the exit, freeing up boogie room for those who were there to really get down. All in All, a unique, but still completely awesome night at the Mishawaka!