Head For The Hills with Bonnie Paine and Daniel Rodriguez from Elephant Revival and Caribou Mountain Collective 5.16.15 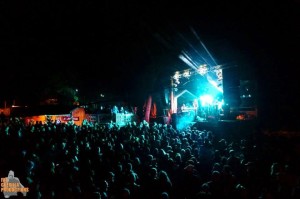 Every year as the spring blooms into fruition, The Mishawaka Amphitheatre opens their legendary stage with a show from Head For The Hills. This yearly event once known as the Waterfront Music Festival, has now become ‘Pickin’ On The Poudre.’ This year was a special one with Bonnie Paine and Daniel Rodriguez assembling a small band to support along with Caribou Mountain Collective. As is the custom, massive charter busses wheeled around town picking up music fans before making the turn up scenic Colorado State Highway 14 towards The Mish. For those that don’t know The Mishawaka Amphitheater is a little slice of heaven situated on the banks of the Cache La Poudre. It is a full service restaurant that moonlights as one of the most intimate and unique venues in the country. Everyone from Joan Baez to moe has performed here, and despite only having room for around 800 ticketholders it has a serious reputation as an unparalleled venue. 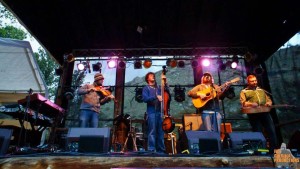 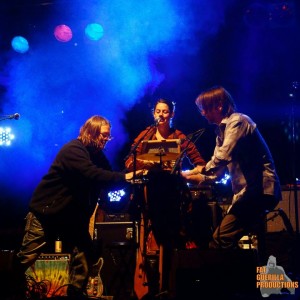 We took the bus up early in order to enjoy a nice meal and the surrounding sights. The weather had been rainy all week long, but in Bellvue we only got a light sprinkle. The sky was overcast, but for the most part the rain held off. Around 8 PM Caribou Mountain Collective took the stage. You may remember their bassist Curly Collins from his time with Mountain Standard Time. They got their set going strong with a rendition of Mickey Newbury’s “Just Dropped In (To See What Condition My Condition Was In)” of Big Lebowski fame. The Caribou Mountain Collective sounds like they are at home picking on a porch or playing around a campfire. There is an inherent comfort in their performance that is contagious. As they played for just under an hour would-be revelers made their way inside, and slowly filled in on the cement floor. Originals like “Big Bill’s Gang” were narratively intriguing and musically infatuating. Caribou Mountain Collective is another one to watch on the Front Range.

As the night began to fall over the crowd Bonnie Paine and Daniel Rodriguez from Elephant Revival took their turn on the stage. They brought along guitarist Arthur Lee Land and Bonnie’s sister Annie Paine on bass to fill out their sound. This grouping was an utter surprise. Front and center was Bonnie’s angelic voice that commands attention. She is a fairy who blesses us with her music. Obviously they didn’t hesitate to treat the crowd to a slew of Elephant Revival classics including the fan favorite “Grace Of A Woman.” They invited “Sloppy” Joe Lessard up to join in on “Truth Is.” Musically this was an absolute joy that broke up the festivities nicely. If Bonnie and Daniel manage to put this group together again, go see them live.

Head For The Hills continues to be one of the most dynamic and powerful bluegrass bands in Colorado today. They are on the heels of their latest album Blue Ruin, which came out last year, and have continued to tour prodigiously. Few bands maintain the attention to songwriting that H4Th does with each new tune. They are absolutely at the top of their game right now. They treated fans to two full sets of music with lots of friends and random carousing.  They of course brought along master of the keys James Thomas to lend a hand. Songs like “Up On The Mountain” and a sublime “Light The Way” dotted the first set. The second set was simply magical. They opened set two with a version of Ween’s “Buckingham Green.” They wished bassist Matt Loewen a happy birthday before continuing with a rendition of Japanese Cowboy also by Ween. They invited up Bonnie Paine to sing an Elephant Revival song before also bringing up Daniel Rodriguez and Arthur Lee Land. The newly formed super group went into a tribute B.B. King with “Call Me The Breeze” and “The Thrill Is Gone.” As the night cooled fans scattered for the bus. The audience dwindled a bit, but those that stayed got to watch Head For The Hills play until 1:30 AM. Head For The Hills is not just another local bluegrass band. They are incredibly talented and unafraid to write exceptional songs. Their yearly pilgrimage to The Mishawaka is one of your best opportunities to see H4Th throw down in front of a hometown crowd. I’ll see you there next year.