An Evening with Joan Baez… 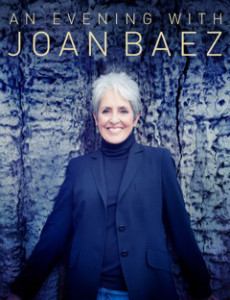 “My fans matter most to me,” Baez said. “I want people to come in and not only enjoy the performance, but feel like they played a part in it.”According to Baez, it’s  the connection fans feel during the performance that they remember, not the performance itself. 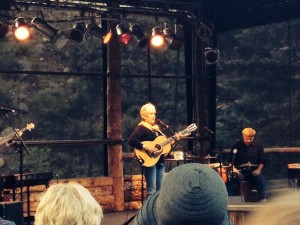 Within the first few minutes of Baez being on stage, you could tell that she wasn’t just a
n artist who performed music to people; she’s an artist that performs music WITH people.

Throughout the entire concert, Baez welcomed fans to sing along, and frequently yielded the spotlight to her keyboard player, Dirk Powell, and percussionist, Gabriel Harris. Baez also invited her tour assistant, Grace, on stage to perform a duet.

“Joan often invites Grace on stage to perform,” said Blair Woods, Baez’s tour manager. “Grace is trying to kick start her own singing career, so Joan tries to get her as much exposure in front of a live audience as she can.” 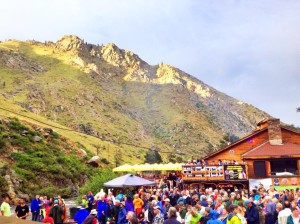 Nearly an hour before show start, fans filled the Mishawaka Ampitheatre. We were fearful at first that we weren’t going to be able to fit everyone into the venue! Though, we were sure that if fans couldn’t’ find room on the ground, Baez would have been more than happy to offer them a spot on stage.

Despite the ‘chaos’ of having a packed concert venue, the evening was full of generous gestures:

People offering their seats for those who couldn’t stand.

Fans offering to move farther back to ensure that those sitting could see.

Or our security team carrying people’s chairs onto the shuttles after show end.