Some say that hip hop is dead. Some say that hip hop will never die. Friday night’s EPMD show was a testament to the latter. Even though inclement weather moved the show indoors to the Spokesbuzz Lounge, hip hop heads were treated to an astounding performance that shook the Mishawaka foundations with bass bumps, breakbeats and b-boys. Erick Sermon and Parrish Smith, along with their trusty DJ Scratch, kicked it back old school with hits from their album “Strictly Business”, which comes straight from the golden era of rap in the late 1980’s. 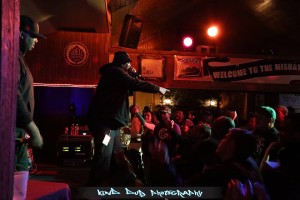 The evening started with 3Two, a local emcee from the Denver area, who rocked the stage along with DJ Brisco Jones. The duo performed all original songs with heavy influences of loop-based beats, a style that emulated mid-90’s rap with a contemporary flair thrown in. While 3Two laid down his smooth bars, Brisco threw in some turntable scratches that complemented the flow of the show. 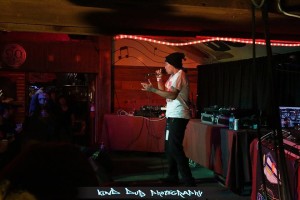 It was going to be hard to follow up such an amazing first act, but if anyone was up to the challenge, it was Fort Collins’ own Qbala. And boy, did she follow it up. Kalhie Qbala, who is an outspoken gay female rapper, threw down rhymes for an ecstatic crowd that grooved along with the looped beats. Accompanying her was the Kind Dub crew, who DJ’ed and provided excellent shots of the show. Qbala’s rhythmic meter was on point, and her lines were quick and dirty. But the  best part about Qbala’s performance was her eclectic style, her confident demeanor, and her “zero f*cks given” attitude. She would talk to the crowd between tunes, tell her own life stories, and give praise to the local music community. With all this love for her fans and community, it’s no wonder why the crowd went nuts.

Once EPMD had finished their set, Qbala and 3Two came out again for an eager crowd. The emcee’s mostly freestyled and vibed with the remaining fans.