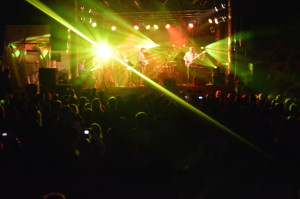 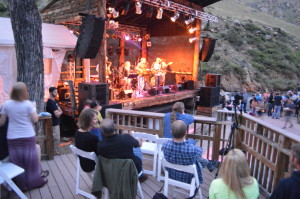 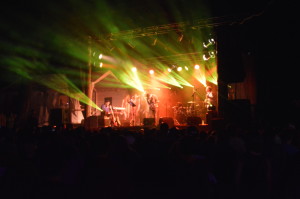 Friday July 18th marked one of many Northern Colorado musical family reunions hosted by Dead Floyd at The Mishawaka. These gatherings are notorious for characters in true form and lots of goofy surprises. This year the lineup started off with Constitution, which then rolled into The Holler! and finally, Dead Floyd; And needless to say, the Fort Collins family of bands kept their Fort Collins crowd happy and moving! Constitution started off this Friday night fiasco with quite a bang, the spark of energy that fueled the fire of the evening came from front man Matt Mahern and his band of party police did exactly that, got the party rockin. Their up-beat sound, The Holler! came next and they came with a clash! Headed by energetic front man, mustache enthusiast, and recent winner of the 2014 Telluride Bluegras Trubador Award, Micheal Kirkpatrick, this group never fails to impress. Their sound contains high energy, dance provoking beats while tastefully intertwining finer points of traditional bluegrass. This sound aside the booming voice and vibrant Micheal Kirkpatrick inspires fans consistently to do one of two things: shout or Holler!  In the midst of the impressive set, after asking Dead Floyd (sarcastically) for permission to do a Dead cover through the microphone,  the band covered the Grateful Dead’s “Bird Song” with a twist of their own that revitalized and re-energized the classic Grateful Dead song, while simultaneously preserving its beauty. Then there’s Dead Floyd… As Micheal Kirkpatrick stated during The Holler! set, “this band impressively covers two of the greatest bands to ever exist”. Two re-create an eerily similar to, and equally full and intricate sound as both Pink Floyd and the Grateful Dead produced as a four piece is exactly that; impressive. Seemingly, the head bopping, funky bassist typically took the vocals on the Pink Floyd Songs while the face melting and quick picking guitarist covered Dead songs. This set was full of style, including a classic cover of “Scarlet Fire”, (Scarlet Begonias>Fire on the Mountain, paired together as the Dead frequently did) as well as “Althea” before delving into a front to back cover of Floyd’s “Dark Side of the Moon”, or as we like to call it, “Dark Side of the Mish”. This included female vocalists who NAILED “The Great Gig in the Sky” and a beautiful sit in saxophone during “Us and Them” (follow this link to see a video of Dead Floyd performing “Us and Them” https://www.facebook.com/photo.php?v=10204282377282259)