On August 22nd the mish appeared to be undergoing an alien invasion… deers, goats and squirrels  surrounding the venue  were in shock of what they were seeing and hearing. The show itself was out of this world. For those who don’t know EOTO is a live and improvised electronic duo, made up of percussionists Jason Hann and Micheal Travis of The String Cheese Incident. True to their title, they bring you a unique experience each and every time, this time was one for the record books. Accompanied by the company Real Big Lazers, the mysterious eerie and beat heavy sounds of EOTO were well accompanied by these aesthetically pleasing lights and lasers. In addition to fog, lights would project from the stage over the crowd, a lost creating a ceiling. To the spectator below, the sight was comparable to being under water looking up towards the surface. Quite the spectacle.

Aside from the jaw dropping visuals provided by Real Big Lazers and their crew, the weather was amazing, the crowd was energetic and close to capacity. Time and time again I find myself impressed with these two musicians and their wide array of musical capabilities. On my drive up to the venue that day I was listening to a String Cheese Incident mix tape that was a bit heavier on the bluegrass… hearing Hann and Travis play that fast paced beat and those intricate fillers one hour and then hear them play some heavy, improv electronic dub, house, downtempo, you name it, the next hour is impressive to say the least. Follow the link below titled EOTO Mishawaka 2014 to check out a video with great footage of the lasers and the music they were accompanying. 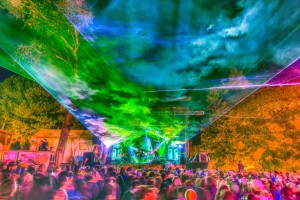 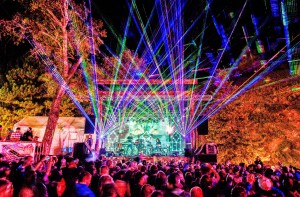 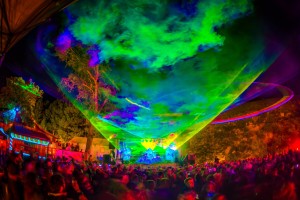